The Diary of a First Time LARPer II

I’m back from another LARP adventure – bruised, mud-splattered, thorn-stung and still wiping various colours of face paint from my eyes; but guess what? I’m loving it.

This LARP business is fast becoming an obsession for me. When I first dipped my proverbial toe into the world of Durholme and its surrounding environs it was an incredibly strange experience. Though it was definitely entertaining I still felt overwhelmed by and separate from the action, like a cinema-goer who’s wandered through the invisible barrier of the screen. At first all I could do was gawp. Now I’m finding my feet and getting into it a little bit more, I can honestly say there’s nothing quite like LARP for filling your Saturdays.

Two weeks ago Sable returned to Durholme and went on an expedition into the surrounding area of Rovac, in which she met the True Elves of the Hidden Valley, helped to free them from the tyranny of invading dwarves and tried her best not to get killed. Climbing up and down the wooded hills surrounding Durham, I must admit I was impressed by the system; a huge crowd of extras playing NPCs or ‘non-player characters’, who did their bit and then quickly ran on ahead to the next designated encounter spot, then changed character completely. The thought and depth which is ploughed into the game behind the scenes is staggering. Thus I was overjoyed when I arrived this morning to be told that I was to be part of the ‘monster’ crew and playing an NPC.

END_OF_DOCUMENT_TOKEN_TO_BE_REPLACED

The Diary of a First Time LARPer

Last night was, well… interesting. Last week, I would never have imagined that I would spend the evening in a darkened tavern, playing a wooden board game with an orc, a warrior monk and a high priest of the Sordanite faith. We struggled to see the dice under the feeble light of a single candle. With our counters mostly captured the orc roared his approval at a game soon to be won; that is, until a cold breeze and shrill cackling on the air announced the presence of air demons! One swirled around our table and blew out our light, then disappeared into the darkness as the sound of chairs scraping backwards and swords being unsheathed left our game completely forgotten.

END_OF_DOCUMENT_TOKEN_TO_BE_REPLACED

The proceeds of one very long and fulfilling day in the land of the Prince Bishops. 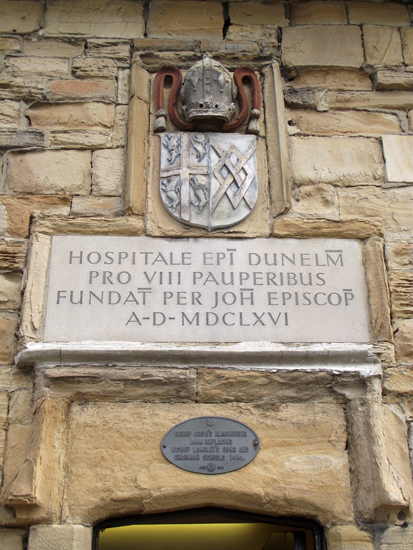 END_OF_DOCUMENT_TOKEN_TO_BE_REPLACED

The Perfect Statue (a story)

“I see you’re looking at our statue. Nice, isn’t it? Perfect, so they say. Aye, it was perfect where it was, if you ask me. Stood here for well over 150 years, it has, and then they pluck it out of the ground to move it a few metres up the hill – and why? – so they can squeeze more market stalls into the square. Makes you wonder what’s more important these days, doesn’t it. All they seem to care about is making money; hundreds of years of history can go and take a hike.

But I described it as perfect, didn’t I. See that man sitting on the horse, all decked out in his hussar gear? He wasn’t even from round here. It’s a story in itself how he ended up as a statue in Durham. To cut a long story short, the guy owned some pits round here and founded Seaham port. So I guess it’s fair enough.